There are many great sources for information on this breed.  They are probably best know as being Lion Hunters.  This conjures all sorts of mental images and really can get the imagination going.  Following is an informative article that I like and is copied from The Rhodesian Ridgeback International Foundation and written by S.H.Stewart.

The Reverend Charles Daniel Helm was born in 1844 and died in 1915. We don’t even know whether he was a dog-lover or not, but history records that he was the man who brought two dogs to his mission at Hope Fountain near what is now Bulawayo, which is in the far south-west corner of Rhodesia (now known as Zimbabwe), and these two bitches were to become the foundation of what we refer to today as the Rhodesian Ridgeback.

When one realises how recently all of this happened it is very disappointing that we are unable to be more definite about the origins of our national dog. So much of what is written on the matter is subject to questioning and my views are strongly shaped by the writings of David Helgesen.

The name of the breed is determined by the peculiarity of the ridge on the back of these dogs. In Europe these ridges are unknown but they are common in much of Africa. For example, many of the Sitkas in this country have ridges, and this feature is observed frequently in the indigenous dogs of Zaire, Angola, Tanzania, and Zambia. The Mesopotamian Hunting Dog was brought down the east coast of Africa in the course of tribal migration over several centuries and part of the movement was deflected towards the west. We must assume that these dogs carried the ridge gene and that eventually they reached the Cape and acquired the name of Hottentot Hunting Dog, serving a very useful purpose with the Khoisan in a semi-domesticated environment.

Evidence of the first domesticated dogs on our planet goes back to 4500 BC in Egyptian tombs, and in 1729 AD we have a written record of ridged dogs at the Cape. Apart from Africa the only other place where ridged dogs are found is Phu Quoc in the gulf of Thailand.

The Europeans arrive
In 1652 we have the arrival of the Europeans at the Cape, and the dogs they brought with them did not cope easily with the local diseases. Nonetheless interbreeding occurred with the indigenous hunting dogs and the foundation was laid for the contribution of South Africa to the Rhodesian Ridgeback.

It should be stressed however that the Hottentot Hunting Dog was very similar to the Sitka, that is it had a small narrow head and a jackal sized body, in other words, very different from the Ridgeback of today. But it did have a ridge, and the settlers made much use of it in producing what they sought for hunting and security purposes.

One of the best known early pictures of a ridged dog depicts the scene of a dead Hartebees surrounded by Khoisan hunters, with that particular dog, near Lake Ngami in Botswana. That dog belonged to a well-known hunter called Baldwin; he recorded it in a drawing in May 1858 and though it is no Ridgeback by today’s description it does have size and substance, and Baldwin acquired it in Bloemfontein, South Africa.

Several well-known hunters of whom Hartley, Viljoen, Swartz, Jacobs and Selous were the best known, worked primarily in the Mashonaland area. However another, Cornelius van Rooyen, is the one of importance to our breed, and he operated mainly in Matabeleland.

Cornelius was born at Uitenhage on November 6, 1860 and the whole family moved to Zeerust in 1868. By 1874 they were at Shoshong and in 1875 they moved up to Tate. [Robert Moffat had established (a) a permanent mission in Matabeleland and (b) friendly relations with Mzilikaze. The Missionary Road from Cape Town passed through Beaufort West, Kuruman, Shoshong, Francistown and through Bulawayo onwards to Salisbury.] He was married to Maria Vermaak of Bloemhof, by Reverend Helm at the Hope Fountain Mission outside Bulawayo, in 1879.

Meanwhile Reverend Helm brought two unridged (?) bitches from Kimberley (possibly as far South as Swellendam) also in 1879. They were both rough coated and grey-black in colour and Cornelius bred them to his pack immediately. The odd thing, please note is that no one is convinced that either of these two bitches was possessed of a ridge, and yet they are regarded as the origin of what was to become “the escutcheon of the breed”, that famous ridge.

Dermoid sinus
Broadly speaking, Cornelius van Rooyen used the following breeds of dogs in his breeding program, though it must be accepted that several of them would already have been cross breeds, in other words, we are really talking about a gene pool into which he adds a bit more of this and some more of that.

The principal breeds used were Khoikoi, Greyhound, Bulldog, Pointer, Irish Terrier, Airdale Terrier, Collie, and Deerhound. Interestingly enough no mention is made of Bull Mastiff and yet today we talk about our dogs being too “Mastiffy” in appearance. On the other hand we attribute the kinky tail problem in the modern Ridgeback to its Bulldog antecedents, and the brown nose (or liver nose) examples we relate to noses of the same colour in the Pointers that were used.

In the midst of all this no one seems to have determined the origins of the Dermoid Sinus, one of the real bugbears of the breed, and it just has not been attached to any specific source. You would think that, with the breed being so young, someone would have a handle on the origins of what is almost a uniquely Ridgeback problem. I have heard that it was not unusual even as recently as fifty years ago to put down a third of the puppies on account of this upsetting defect, and when recently doing tests on the effects of folates on this affliction.

Australian researchers used a frequency of 16% as being normal incidence for untreated dogs. Breeders there and here regard the normal incidence as 3 – 5%, but whatever figure one uses it is a problem which goes back into the history of our breed with no known source.

While searching for Nguni dogs (Sitkas) in Kwa-Zulu Natal in 2001, it was found that even though in places almost a third of them had ridges, no one knew of the existence of dermoid sinus. So perhaps the origins of the Ridgeback will not disclose the source of dermoid sinus and we might well have to accept that the genes contributed to the pool were mixed in a manner which gave rise to this weakness or, if you prefer, produced a dog which had a higher need for folates than its original components.

Use of the title Ridgeback to describe these dogs rather than “Van Rooyen Dogs” or “Lion Dogs” commenced shortly after 1910. The 1920’s saw the first Breed Standard proposed, the entry of Lion Dogs at Shows (exhibited at the first Bulawayo Kennel Club Show as the ‘Rhodesian Lion Dog’), the registration of the first dogs (‘Grootedam Gwen’ and ‘Grootedam Leo’) by the South African Kennel Union, (now KUSA), the name changed to Rhodesian Ridgeback officially, and they appeared in increasing numbers at shows in Rhodesia.

And a standard emerges
Broadly speaking the Ridgebacks from different parts of Africa vary in size. Those to the North of Zimbabwe are somewhat larger, as though Great Dane was bred into them whereas those in the erstwhile Rhodesia are smaller (and much closer to the desirable height and weight required by the Breed Standard) while in South Africa we have a slightly larger version (but not as big as to the North) which can tend to massiveness.

Perhaps more Boerboel was bred into our local dogs. Whatever the regional variations we have all obtained a loyal and dutiful pet which is equally good at defending the lives and property of his family unit. Just as comfortable in the bush as hogging all the warmth in front of the suburban home fireplace, this recent breed traces his origins directly to the ancient hunting dogs recorded in stone by the Pharoahs.

Francis Richard Barnes is credited with being the principal creator of the Breed Standard in 1925. A very well known breeder of Ridgebacks under the Eskdale Kennel name, he arranged to have about twenty examples of the breed present at a breeders’ symposium after a Bulawayo dog show and the best points of each were determined and used to establish the Standard, which follows the Dalmatian Standard in many respects. This Breed Standard has remained unaltered, to all intents and purposes, ever since.

However one only has to look at the photographs provided in Hawley’s book to become aware of how the Ridgeback has changed to what we find in the show ring today. Major Tom Hawley is South Africa’s authority on our national dog and the picture of Eskdale Connie, taken in 1925, contrasts strongly with other photographs from the forties and fifties which in turn show differences 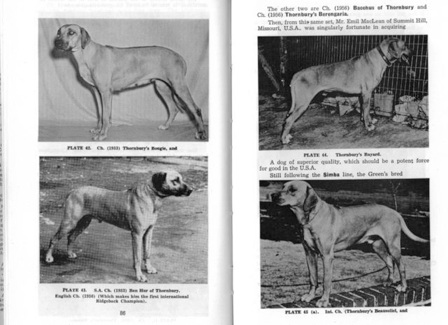 from the dogs in today’s show ring: apart from variations in the general conformation of the dogs you can see that the majority had prominent forechests, a feature which has all but disappeared.

That which is written above represents merely a segment of the history of this dog. It overlooks the part played by the Steekbaardhonde and Vuilbaardhonde brought to the Transvaal by the Voortrekkers. It omits in fact all the developments which took place in South Africa. The breed sprang up in large numbers throughout this country and these dogs couldn’t possibly all have been obtained from Rhodesia. To achieve a better informed view of the origins and development of our national dog, I suggest one refers to the following books:
The Definitive Rhodesian Ridgeback by David Helgesen.
The Rhodesian Ridgeback, the Origin, History and Standard by T C Hawley.
The Rhodesian Ridgeback Indaba by J N Murray.